Classic DMC is the world's largest source for new original stock (NOS), replacement, reproduction parts and accessories for the original 1981-1983 DeLorean automobile. Our 40,000 square foot (3,700+ square meters) warehouse contains more than 3.5 million items. In addition to the sale of parts, we have a full service and restoration centers across the USA capable of everything your DeLorean might need. For more on us, and our history, read on...


First, a bit of history...
When John DeLorean’s company filed for bankruptcy in 1982, owners of the approximately 9,000 DeLoreans built were left wanting for parts and service.  Most, if not all, DeLorean dealers at that time were understandably reluctant to perform warranty work, and they were also unable to obtain service parts for their customers while the company was in such disarray.

Shortly after the DeLorean factory in Northern Ireland was liquidated in 1983, the remaining inventory of parts, some tooling, a full set of engineering drawings and other company documents were acquired by a company in Columbus, Ohio that saw an opportunity in filling the parts needs of DeLorean owners and service centers.  Over the next couple of years, this company was also able to acquire additional quantities of some parts from the original suppliers to the DeLorean factory that, in some instances, had been left with significant quantities of DeLorean-specific inventory.

Stephen Wynne, originally from Liverpool, England operated an independent auto service facility in Southern California that specialized in English and French cars. He was approached by a DeLorean owner who needed repairs to his car and Wynne quickly recognized the Renault drivetrain and other components commonly found on cars that his company normally serviced. Word soon spread throughout the hundreds of owners in the Southern California area that DeLorean service was no longer an issue. 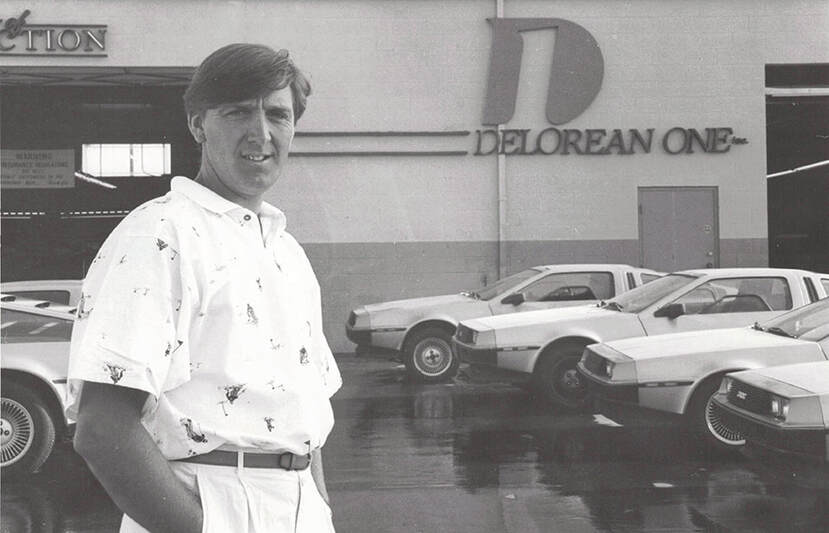 Cars of Distinction/DeLorean One, Canoga Park, California (circa 1984)
In 1985, Stephen Wynne formed a partnership with a DeLorean owner, creating a company named DeLorean One, a mail order parts and full-service facility dedicated to the DeLorean automobile.  In 1988, DeLorean One opened a second location in Houston, Texas to serve their growing customer base.  This facility, overseen by Wynne who relocated to the area as this location opened, was chosen based on the large number of known DeLorean owners and existing customers in the area. This location in the Sunbelt was also a central United States location for owners who wished to have their DeLoreans professionally serviced, but who may have been reluctant or unable to send their cars to the California location. 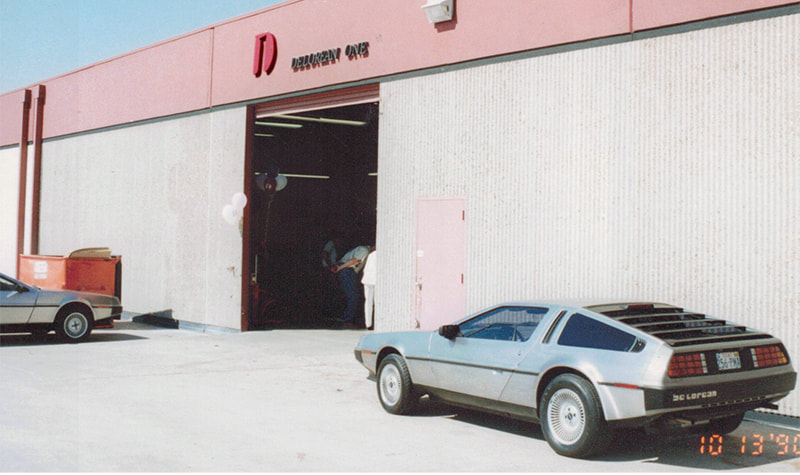 DeLorean One, Houston, Texas (circa 1990)
In 1995, the DeLorean One partnership was dissolved due to differing viewpoints as to the direction of the company.  Stephen Wynne retained the Houston location, renaming it “DeLorean Motor Company”. 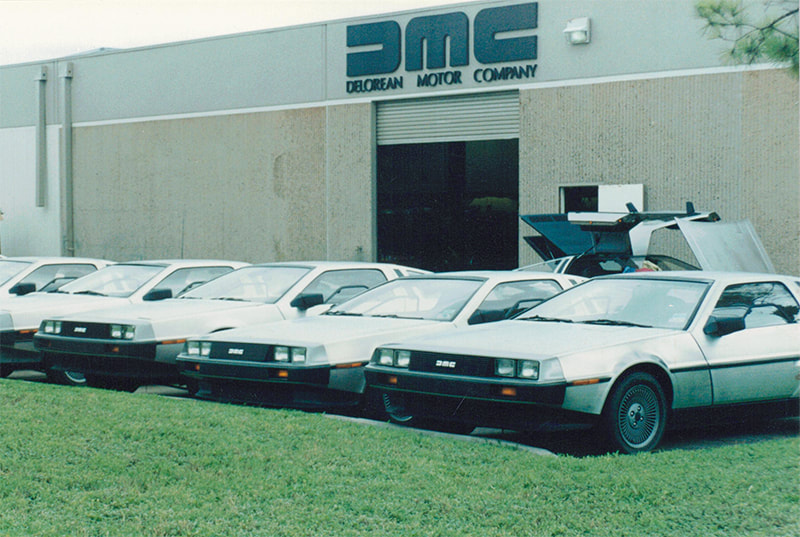 DeLorean Motor Company, Houston, Texas (circa 1997)
In 1997, Wynne and his DeLorean Motor Company acquired what remained of the Columbus, Ohio DeLorean parts inventory and the exclusive distribution rights, as well as the tooling, engineering drawings and company records. In 2001/2002, Wynne built a new facility (see below) in northeast Houston and closed the Columbus, Ohio parts warehouse and moved the 60+ tractor-trailer loads of items to this new facility. 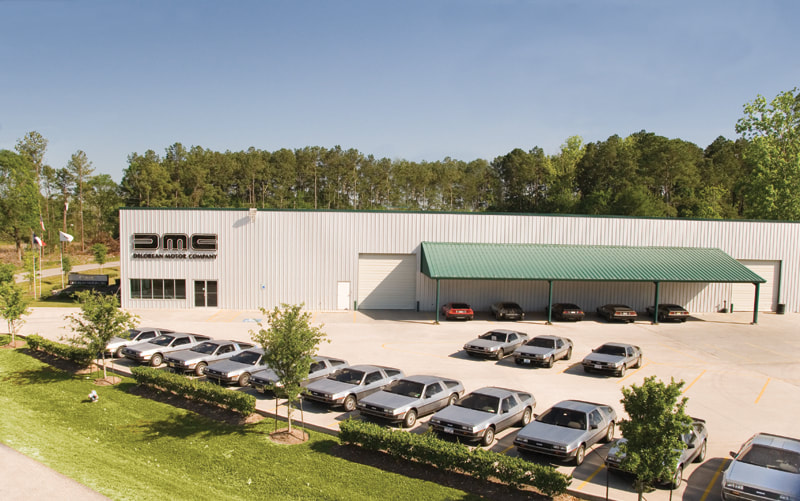 The 40,000 square foot (3,700+ square meters) purpose-built parts warehouse, showroom, offices and service/restoration center was completed in 2002, on a 2.5 acre tract of land in a mixed-use residential and commercial area.  Indoor, secured storage for up to 80 DeLoreans is easily accomplished within this facility.

Original and Reproduction DeLorean Parts
It is a common misconception that DeLorean parts are unavailable or prohibitively expensive - neither could be further from the truth.  Approximately 30,000 square feet of the DeLorean Motor Company facility is used to store the following types of inventory:

New Original Stock (NOS) parts, which came from the former DeLorean factory, US Warranty Parts Center and in some cases, suppliers to the original DeLorean Motor Company.  These are new, circa 1982 parts, and include such items as body panels, interior trim, glass, complete engines and transmissions and more.  Approximately 90% of the 2,800+ different parts used on the car are available as NOS parts.

Original Equipment Manufacturer (OEM) parts are items that are still manufactured by the original supplier to the factory, to the original or an improved specification and are also referred to as "replacement" parts.  Examples of these parts include fuel injection components, clutch components and other consumable items for which the supplies of NOS parts have been exhausted or the existing stocks of NOS parts are unsuitable for use.

Reproduction parts have been a  part of the DeLorean Motor Company product line for decades.  When supplies of NOS parts are exhausted and OEM parts are also no longer available, a cost study is done based on historical sales volume, tooling and unit costs, to determine the feasibility of creating a reproduction part.  Since the 1980s, more than 300 reproduction parts have been introduced including windshields, power window regulators, interior trim, electrical switches, fuel and ignition system components, weatherstripping and much more.

Accessories and gift items have proven to be a popular part of the DeLorean Motor Company offerings.  Apparel, models, books, posters and gift certificates are appreciated by owners and enthusiasts alike.  Car-specific items like floor mats, cleaning kits, and car covers are popular items for owners or as gifts purchased for owners.

Service and Restoration
DeLorean Motor Company has a 7,500 square foot service, restoration and assembly center located within the aforementioned facility, and is currently staffed with four full-time service technicians.  Minor and major mechanical service, including stainless steel repair is performed on DeLoreans brought or shipped in by owners from across the country and around the world.

DeLorean Car Sales
For many years, DeLorean Motor Company has been offering restored and refurbished DeLoreans to interested purchasers.  These are either cars that have been consigned to DeLorean Motor Company by their owners for sale, or cars that have been purchased by the Company from individuals to be resold.  In either case, each car is serviced by our staff using the correct NOS, OEM and reproduction parts to ensure that these will be good running, reliable, cosmetically attractive cars that are suitable for either pleasure or daily use.  Total pre-owned car sales since inception in the late 90s have numbered more than 250 cars. 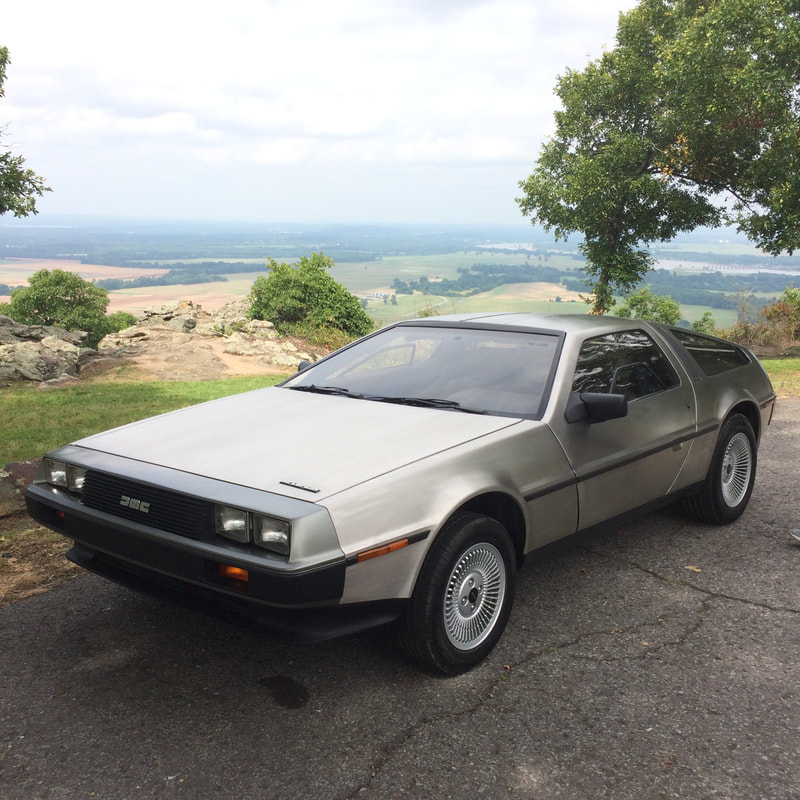 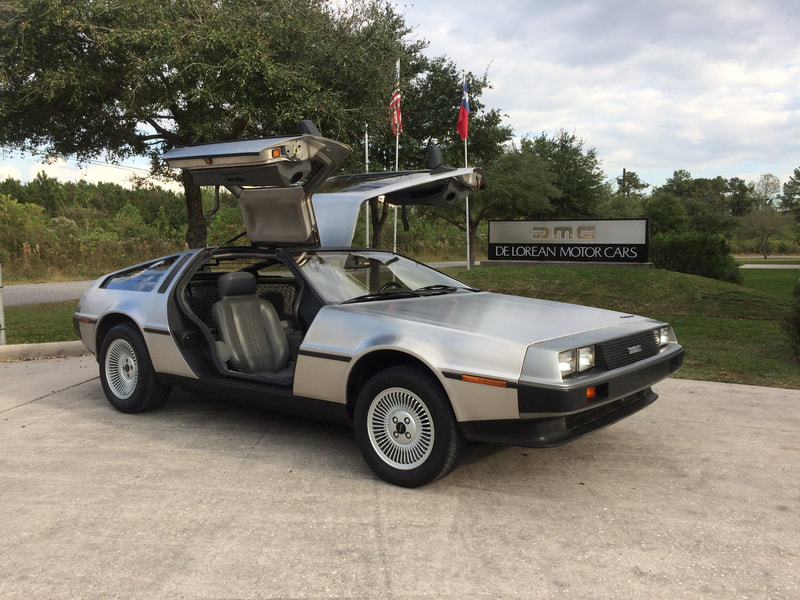